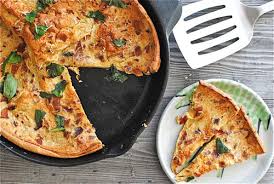 Mix the yeast with a small amount of the lukewarm milk, and pour it in the hole together with half of the (lukewarm) milk.

Mix with a spatula from the middle (the hole) until you get a smooth, liquid dough which is a bit thick.

While still stirring, add the rest of the milk bit by bit. Slowly keep stirring until you retain the smooth texture (it should drip from the spoon like a string).


Cover the bowl with the dough in it with some cling foil and let the dough rise at a warmer place for about an hour. The next steps are per pancake.

Step 7-8 Baking a half-done pancake- Put some butter in a low pan (with a handle) with a middle heat. When the butter is hot (and slightly browned) add about a quarter or a fifth of the dough and quickly spread it around the entire surface of the pan. The cake should be thin, but thicker than a crepe. Don’t lift the cake before the top is dried and is slightly yellow

Get a long, thin spatula to lift the cake up and have a look at the bottom side. When the cake is beautifully browned turn the cake with the spatula, or (if you can) by throwing it up, and turn off the heat.

Step 9 Finishing the pancake with ingredients- If you want a natural pancake, skip this step. As I said in the introduction there are many different ingredients that go well on this type of pancake. There are some important orders in making these pancakes, which are the following: cheese should always be put on the cake first (so it is at the bottom of all the ingredients and right on the cake), bacon should be put on last because it has to bake well. There are many things important, but you can better find it out yourself. Notice that ingredients that have to be browned (like mushrooms) should be put on the cake at the end, else it won’t touch the pan when turned over. Ingredients like apple and onions also should be put on the cake somewhere at the end of the order, instead of the beginning, because else these ingredients won’t be baked good enough, and they will stay hard and tough. When I say an ingredient should be put on at the end, I don’t mean at the end of the baking process but at the end of the order of ingredients! This all may sound very complicated but it’s quite easy when you do it yourself. Say you would like a ham, bacon, onion and cheese pancake. You should have baked the pancake as I described above, and it should already by flipped over (the top is already browned, but the bottom is still raw!). The heat is still off. First you put on the cheese, spread it carefully. Then, put on the ham. Next, put on the onion, and finally put about 3 pieces of bacon on top. Now, and this is very important, get the spoon of the liquid dough and spread some dough over the ingredients (not an entire spoonful, just use what comes of the spoon when you take it out of the bowl, and spread it in stripes over the ingredients). This way the ingredients won’t fall off that easily. Now you should turn up the heat. When the bottom is browned (this won’t work as beautiful as the other half) and fully baked (without raw spots) try turning the pancake. This can be difficult, it may be easier to use two spatulas. If you really want to be safe get a plate, let the pancake glide on the plate and put the cake up side down back in the pan. Now the ingredients will bake. When you are baking bacon you should put the heat a bit higher else they’ll still be raw. Keep it on for a while. When you think it’s finished, put a plate in the pan (up side down of course) and get the pancake out.

Step 10 Finishing the pancake as natural- If you don’t want to put ingredients on the pancake turn the heat up until also the bottom side is done, and serve with syrup and icing sugar (or regular sugar). Also ice is very good on natural pancakes. Do whatever you like!