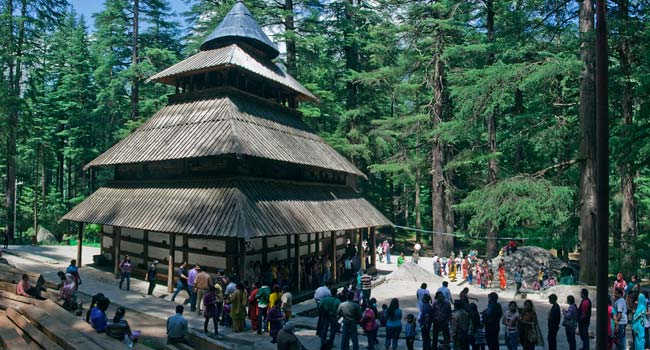 Hidimbi Devi Temple, also known variously as the Hadimba Temple, is located in Manāli, a hill station in the State of Himāchal Pradesh in north India.It is an ancient cave temple dedicated to Hidimbi Devi, sister of Hidimba, a figure in the Indian epic Mahābhārata. The temple is surrounded by a cedar forest at the foot of the Himālayas. The sanctuary is built over a huge rock jutting out of the ground which was worshipped as an image of the deity. The structure was built in 1553.


The Hidimba Devi Temple has intricately carved wooden doors and a 24 meters tall wooden “shikhar” or tower above the sanctuary.The tower consists of three square roofs covered with timber tiles and a fourth brass cone-shaped roof at the top. The earth goddess Durga forms the theme of the main door carvings. The temple base is made out of whitewashed, mud-covered stonework.