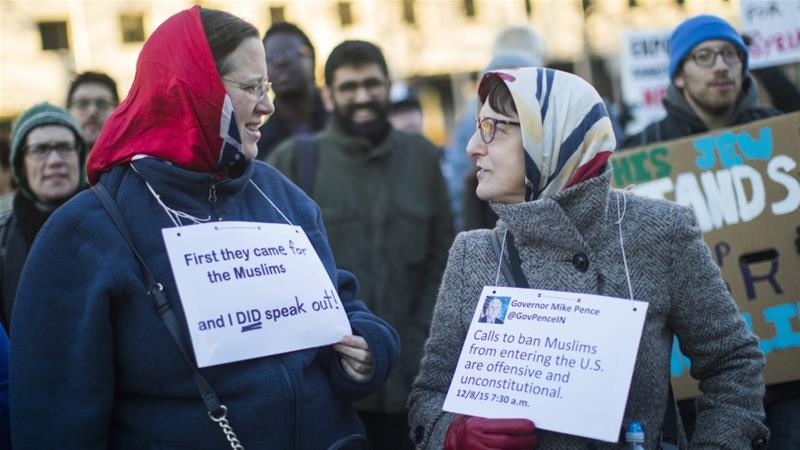 Who said non-Muslims are less human! Muslims are facing hate these days in the form of hate crime, putting ban on Muslim countries, or calling the whole community as terror promoters, shows extreme hate against Muslim.


As a few Islam extremists follows Muhammad work style and his sayings like this “Islam teaches that non-Muslims are less than fully human.  Muhammad said that Muslims can be put to death for murder, but that a Muslim could never be put to death for killing a non-Muslim.” This example set by Muhammad. Because of these kind of Muhammad’s saying, the whole Muslim community treated as terrorists, same can also be a reason behind Donald Trump’s hate for Muslims?

Recently US President Donald Trump ordered travel ban on 6 Muslim countries, and as US is in the center of world power politics, and main driving force behind world economy, other countries also followed the acts of US. Bad behavior, discrimination with Muslims, presenting and targeting them for all terror attacks and activates worldwide are forcing people to make a perception against Muslim community.

Hate crime activities and perceptions came in trend mostly after the Donald Trump’s hate speeches, policies and actions against Muslins. Trump administration want a holy war against Islam and it shows by Trump’s immigration executive orders against Muslims, building wall on border, cutting funding for sanctuary cities, these kinds of policies and thinking says for long time then it may force Islam community to give same hate treatment to Trump people or administration or noncooperation with them.

No one can control anything by hating a community or win harts of others or make sure the security of a country, it will just marginalize Muslims and after certain time it will increase the hate within hater’s community.

These hate is not increased only because of Trump or US politics, Islam get blamed first every time, because there are many other reasons like countries power politics, petrol game wordwide, ISIS attacks globally, terror attacks in which Muslim name comes out, war in Israel, wan in Iraq, terror attacks in America, France, India, Bangladesh, attacks in turkey,  ISIS radical attacks, extremist attacks and war worldwide, kidnaping of Americans and American friends by ISIS and other Islamic terrorists.

“18,000 deadly terror attacks committed explicitly in the name of Islam in just last ten years.  (Other religions combined for perhaps a dozen or so). ” reference from the ReligionOfPeace.

Muslims community mainly ruined by extremist because they follows a few old Islam thoughts like:

“Islam is the only religion that has to retain its membership by formally threatening to kill anyone who leaves.”

“Muhammad, the prophet of Islam, had people killed for insulting him or for criticizing his religion. This included women.”

These facts (example and saying of Muhammad) are true but it doesn’t mean that whole Muslim community doing this and they should not blame for this. If 1% of Muslims indulge in terror activities, it does not mean that 99% are also indulged.

Muslims hates ISIS and other wrong Islamic activities doing in the name of Islam, and to show their hate for ISIS and Islam Extremist, they are running a campaign of “Chalange Islamophobia” and it became a popular trend word wide to show their thoughts like:

“No One Wants to See ISIS Defeated More Than Muslims”

“Extremist does not define Muslims”

Discrimination and hate crime in America and hatred policy of Trump’s administration shows that they just want to achieve their political objective to be in government for long time by giving birth to hate in America’s atmosphere and in the heart of non-Muslim community of America.

Thinkers should raise their voice and try to make people understand that we all are same, we all have the same color blood in our body, we all have same parts in our body, then why this hate between us for any community in the world.