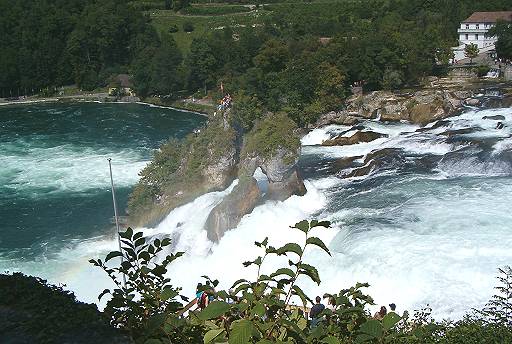 The Rhine Falls is the largest plain waterfall in Europe. The falls are located on the High Rhine between the municipalities of Neuhausen am Rheinfall and Laufen-Uhwiesen, near the town of Schaffhausen in northern Switzerland, between the cantons of Schaffhausen and Zürich. They are 150 m (450 ft) wide and 23 m (75 ft) high. In the winter months, the average water flow is 250 m³/s, while in the summer, the average water flow is 700 m³/s. The highest flow ever measured was 1,250 m³/s in 1965; and the lowest, 95 m³/s in 1921.


The falls cannot be climbed by fish, except by eels that are able to worm their way up over the rocks.

The Rhine Falls were formed in the last ice age, approximately 14,000 to 17,000 years ago, by erosion-resistant rocks narrowing the riverbed. The first glacial advances created today’s landforms approximately 500,000 years ago. Up to the end of the Wolstonian Stage approximately 132,000 years ago, the Rhine flowed westwards from Schaffhausen past Klettgau. This earlier riverbed later filled up with gravel.